My Life with Epilepsy

​          ​   A Lander area teen has used his time promoting disability awareness to earn the Rank of Eagle Scout, the highest award in Boy Scouts. Alec Smith, a long-time member of the Boy Scouts of America, received the award on November 12 at a special ceremony in Lander.
In order to become an Eagle Scout, a young man must have earned at least 21 merit badges in scouting and must demonstrate leadership while performing a project that benefits the community. Alec, who has had epilepsy since the age of 5, saw this as a great opportunity to educate others about epilepsy.
Epilepsy affects one in every 100 people, and one in every ten people will have a seizure at some point in life. Although epilepsy is actually very common, there is still a great deal of misconception about the causes and treatments of seizures. Persons with epilepsy often feel misunderstood and are often met with varied responses to their condition.
Alec completed a series of speaking for seizures. He spoke to numerous community agencies, including the Lander School Board, Lander City Council and a class of elementary students. One of the highlights of his project, was the opportunity to attend the Wyoming Legislative session with Richard Leslie, Executive Director of the Wyoming Epilepsy Association, where he had the opportunity to speak to members of both the House and Senate.
In addition to many public speaking opportunities, Alec distributed flyers about epilepsy and seizures to doctors’ offices, and pharmacists around the community. These pamphlets not only provided important information about epilepsy, but contact information for the Wyoming Epilepsy Association as well, where patients and community members could find additional support for issues related to epilepsy as it relates to school, family life and employment.
The Wyoming Epilepsy Association (WEA) is a charitable non-profit organization devoted to making a difference in the lives of those impacted by Epilepsy, seizure disorders and other health related issues.
Despite the fact that Epilepsy is one of the oldest conditions known, it is still surrounded by mystery and fear. WEA is committed to bringing Epilepsy out of the shadows through education, advocacy, outreach, support services and making discrimination and stigmas a thing of the past.
The work at WEA is driven by the passion of individuals who contribute their time and talent to ensure the utmost benefit to people with Epilepsy and their loved ones. It has a strong and dedicated commitment to dispel myths and replace fear with knowledge and compassion so work sites, classrooms, daycare, social gatherings, etc. will be empathetic and supportive settings for children and adults with Epilepsy.

I wrote a book or Autobiography of myself to work as an attempt to educate people that Epilepsy is not something new and has been around for many years.  In the Book, you will learn that I was diagnosed with Epilepsy at birth and struggled with having seizures for 39 1/2 years of my life, medications never helped control my seizures, but I never gave up on wanting to becoming seizure free, after a second Brain surgery on July 11, 2000 that final procedure made me seizure free.

Currently, at 55 years old July 11, 2016, I will be seizures free for 16 years, what a relief after putting up with the challenges of epilepsy during my childhood, teenager and early adult days.

I have also developed a website to help advertise my book and help as an educational resource (Click on the button My life with Epilepsy and Seizures).

I also what to thank my college instructor that encouraged me to write the book. I had for an online class in 2006 and he fell in love with my 8-page paper, that I wrote for his class about my life with Epilepsy and he told me I needed to turn it into a book someday.

Your Donations and Support,  Will help in developing community awareness to assist in materials and support for people to share their stories.

​To begin my story, I suppose I should start with background information about my condition. My epilepsy was diagnosed when I was 15 months old, that’s when I began having seizures. My father has epilepsy and possibly more of his relatives, but we are unsure due to the fact he is the only child who has had a seizure that we know of. So, my younger sister, my father and myself all struggle with this neurological condition.
I’ve always known that I have epilepsy, I had seizures in elementary school and my parents explained to me well that I have a condition that a lot of people don’t have. So, I went through school knowing that I was different from the other kids, but when I was in fourth grade the seizures stopped. I had gone eight years without a seizure, my sister had never had one and my dad had been seizure-free from using medication for three years.
In January 2014, I came home and my sister and I decided to watch a movie together. We walked into the room, and not even thinking about it I flicked on the light. Soon, my sister was having a seizure. She was 8-years-old at the time. This was earth-shattering for myself and my family because we thought we’d conquered this disease. A few weeks later, I too began having seizures like my sister every weekend for several months. I didn’t stop having seizures until the end of March or beginning of April. This meant that my sister and I were having seizures in school.
In fact, the first seizure I’d had in 8 years was in my pre-algebra classroom. My friends and anyone else who was in the room at the time, had said that I began moaning, I had grabbed the girls arm in front of me and I began shaking as my eyes rolled into the back of my head. This is why I believe it is important to teach first-aid for seizures in school, especially to teenagers.
I presented to my freshman health class and taught them how to take care of someone in a seizure. I also presented to the 8th grade health class; they were given first aid papers, and had many questions about epilepsy and seizures which I answered, along with the assistance of a teacher
​            Students did not appear to be bored during my presentation, and it was worthwhile. In fact, I was surprised at how many questions were asked and how intrigued my peers were. It took me less than 15 minutes to present first aid to the students and the rest was all questions, which took about 45 minutes. It takes under an hour present to these students, and it takes even less for an emergency to happen. Thank you for giving me the opportunity to share my story and my side of the situation.

​Title of the Book:
"My Life With Epilepsy and Seizures"
Website: http://brianpl60-mybook.com/ 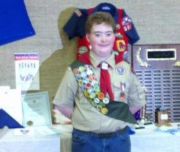 "My life with Epilepsy and Seizures"
Donations & Support
View on Mobile